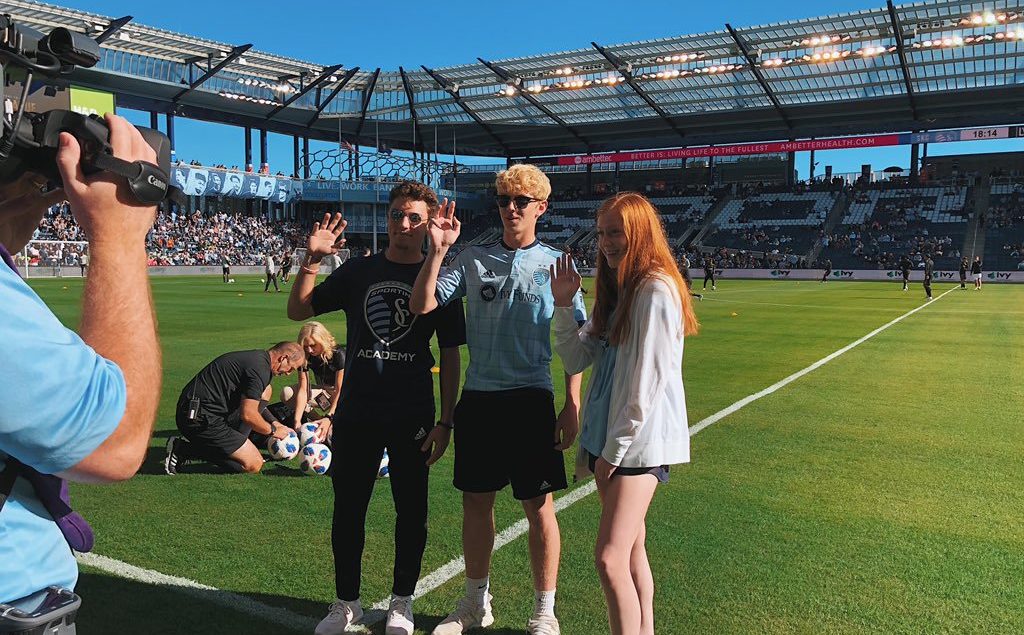 The Generation Adidas International program was created in 2002 to connect grassroots soccer to overseas professional organizations with a goal of becoming the leader of international youth development. Every year Generation Adidas International tasks directors from top Adidas clubs throughout the country to nominate their best boys or girls in the ‘03/’04 age group to attend these premier experiences. Nominees are selected based on positional needs and qualification. This year, four players from three Academy Affiliate clubs were selected to attend the program; Andreas Cem, Matthew Young, Moira Kelley and Emma Lin.

These Academy Affiliate players all attended their respective programs this year from August 11 – 19. Each program lasted 8 days and included 6-7 training sessions and 2-3 games against local academy teams along with 2-3 professional games they were able to attend while abroad. Additionally, players had the opportunity to receive individual assessments from club coaches, tour the famous stadiums in their respective locations and go on guided tours of the cities.

We talked to each player and asked their thoughts on being in the program, what they took away from the experience and what they brought back to their Academy Affiliate teams. Here’s what they had to say:

“The program was an amazing life experience which I cannot thank Generation Adidas International enough for. I got to train with top level coaches, at a top level club, along with other hard working young men which I can now call friends. Things I will take back with me from the trip is the intensity and work ethic we had during our trainings to become a better player, along with a few training drills ideas for my coach.”

“I had a great time in Madrid meeting new players from around the country.  We trained hard and were able to combine our skills in just a couple of days to be able to compete against players who have played together for years. The main take away I can now bring back to my Sporting Wichita team would be how we trained and played over there.  They had a different style of play and many different drills that I think would be beneficial for us to utilize and incorporate into our practices and games.”

“It was such a cool experience that I will always remember.  It was fun getting to meet and play with girls from all over the United States and from France.  The coaches were also from all over the world, so they each brought different perspectives to the game and training.  I will also be able to say that I played in the stadium where next year’s World Cup will be. Things I took away from the program was being able to experience a new style of play, and I hope I can use this to make an impact on my team.  After being in Lyon and training like I did, I will utilize what I learned and bring it onto the field here in the U.S.”

“My experience with Ajax in the Generation Adidas International Program was great. It was definitely intimidating traveling somewhere new with people I had never met, but when I arrived at the hotel with everyone, it felt natural. The trainings were set up to be efficient and effective, which I loved. I especially enjoyed the level of play the coaches and other players were pushing to accomplish at every second. Overall, my experience was unforgettable, as I was surrounded with girls who loved soccer as much as me, who would work their hardest at all times, and who would never fail to have a good laugh. One thing I took away from my experience was that I felt more capable and confident on the ball. When I came back to my affiliate club, I was able to push myself and my teammates to higher levels, as I saw the impressive level of skill my fellow Generation Adidas players had at the same age as me. Witnessing the level of determination and growth other players from the USA and from France had, caused me to become even more determined to make a difference on my club team. I wanted to bring a leading role on my club team and expand on my team’s training capabilities, as I wanted my atmosphere to be similar to the training environment I had back in France.”

Not only did the players see benefit out of the program and have new skills & knowledge to bring back to their own clubs, but the parents of these players did as well. We also asked each of the parents of the chosen Academy Affiliate players, what it meant to them for their son/daughter to be selected for the program by their Academy Affiliate club coaches & directors:

“It was a great honor to have our son be selected by our club to go to Amsterdam.  He’s been with the club for the past 7 years and I believe his hard work and dedication to the club influenced his selection.  Andreas Cem was honored to represent Sporting Wichita in the Gen Adidas program.”

“It was an incredible opportunity for Matthew. We were very grateful that Matthew’s club director felt that he was a strong candidate for this program and recommended him.  Matthew has played for this club for 8 years and to be picked was a huge honor.  It afforded him the opportunity to experience players and coaches from all over the United States, Canada, and Spain and it allowed him to bring those experiences back to share with his team and club.”

“We appreciated Moira’s coaches nominating her for this opportunity and recognizing her hard work and dedication to the sport she is so passionate about.  We were also excited for her to experience the world class training and facilities of Olympique Lyonnaise as well as being exposed to a different country and culture.”

“It was an honor that the club selected Emma to represent her team in France. It was an amazing experience for Emma soccer-wise.  She got to experience a high level of instruction and coaching. She felt well prepared with her soccer skills, which made me feel good about her club back in Iowa.  We also turned it into a family vacation, so we were able to get in some sightseeing.”

In celebration of this once in a lifetime experience, the players were honored on-field at Children’s Mercy Park during pre-game of the Sporting KC match on October 28. Unfortunately, Emma could not attend the recognition because she was competing in an Iowa State cup game.  Congrats again to Andreas, Matthew, Moira and Emma who all have represented Sporting KC Youth Soccer and your teams/clubs so well. We are proud that you’re a part of our Academy Affiliate family!